Autel is starting to become a bigger name in the drone industry and for good reason. They make some nice drones that include many features that are usually found on larger more expensive drones.

The 1-inch camera sensor, the 360-degree obstacle avoidance, and the long battery life are a few of the features included on the Autel EVO 2 Pro that make it one of the best “prosumer” drones available today.

Autel is beginning to give other big-name drone manufacturers some competition due in part to the long battery life that comes with the EVO series of drones. Autel claims that the EVO 2 Pro will fly for up to 40 minutes with its 3-cell (3S) 7100 mAh LiPo battery.

Ever since LiPo battery technology became more affordable and mainstream, LiPos have been the go-to battery for everything radio-controlled. They provide a huge amount of power for their size which makes them a great option for drones. 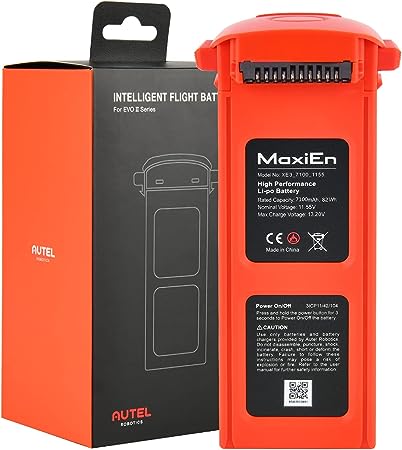 This battery technology has proved to be one of the best due to its affordability, compact size options, and ease of use. However, there are a few things about LiPo batteries that differ from the normal rechargeable AA batteries in the kitchen drawer.

Before I get too far into this post, I would like to mention a few things about battery safety. LiPo batteries are a fairly safe technology, however, they can explode if damaged or treated improperly.

For this reason, it is best to charge LiPo batteries in a fire-proof LiPo battery bag, in case there is an issue while charging the battery.

LiPo batteries also need to be stored properly. This includes a dry area that is ideally around 70-80°F to reduce charge losses. Be sure the battery is not stored in an area that will get too hot as this could cause the battery to explode.

Also, if the battery is stored in a frozen environment, it can damage the cells of the battery and cause it to become unusable.

Lastly, keep it dry to prevent corrosion on the battery connectors. 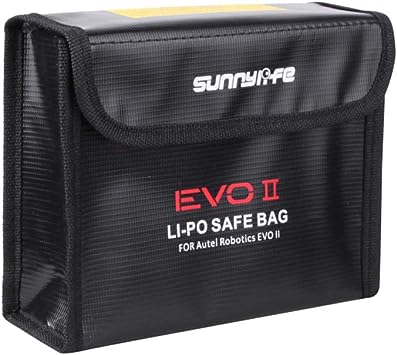 If the drone crashes or the battery is damaged at all, take it out of service. I know from experience that finding replacement batteries can sometimes be difficult, and most times is costly, but don’t let that prevent safe drone flights.

It would be very unfortunate, and possibly very expensive if the drone were to crash due to a damaged battery that was overlooked just to “get the job done”.

How long does an EVO 2 battery actually last?

The Autel EVO 2 drones claim they will fly for up to 40 minutes, and I can almost agree with that number. Personally, most of my flights have been in the 33–35-minute range.

I always start bringing the drone back to its home point as soon as the 25% warning pops up, which is likely the reason for the sub-40-minute flight times. I believe that it could fly for 40 minutes. However, it would be closer to 0 – 5% battery life when it lands, which could be a little frightening.

The drones available from Autel have always had an impressive flight time compared to the competition.

For example, the DJI Mavic 2 Pro advertises a 31-minute flight time, which is 9 minutes shorter than the Autel EVO 2 Pro. That 9 minutes can mean the difference in having to land to change batteries or finishing the mission on just one battery.

Time is money, and in this case, that extra time in the air can increase profits.

The technology that is built-in to the Autel EVO 2 battery is pretty advanced. There is a specific battery menu in the settings menu of the Autel Explorer Flight app, where different battery settings can be adjusted.

The return-to-home/low battery warning can be set in this menu based on the percentage of battery life left. I have my “low battery” warning set to 25% which is my minimum comfort level to start bringing the drone back home.

The Autel EVO 2 battery features a self-discharge function as well. The battery will self-discharge if it is not used for a set number of days, which can be also adjusted in the battery settings menu.

I believe the default setting is 6 days, which means the battery will self-discharge if it sits unused for 6 days. The self-discharging is a feature to help protect the battery by storing it at a safe storage level, somewhere around 50%. This helps to maintain the health and overall life of the battery.

Time for a re-charge

The EVO 2 batteries also have a built-in indicator to tell the current state of charge. This is a nice feature and allows for a quick check of the batteries before you head out to fly. It’s also a nice feature to have when out doing a mission and you need to get “just one more shot”.

Press the button and if you see 2 lights then you know you have 10-20 min left in that battery, which should be enough to get that final shot.

The battery charger that is included with Autel EVO drones works pretty well and it has a USB port on it to charge the drone controller at the same time. However, it is only capable of charging one battery at a time.

Autel does offer a charging dock that can charge up to 4 batteries at once or in succession, depending on the settings of the charger.

The single battery charger that is included with the drone plugs into the receptacle and then connects to the battery. The lights on the battery will blink from low percentage to high percentage while the battery is charging.

Once charging is complete the lights on the battery will turn off and you’re ready to go.

How long do Autel batteries take to charge?

Autel batteries are about average when it comes to the time it takes to fully charge. Autel advertises a 90-minute charge time, but that varies according to battery level and temperature.

In addition to the battery technology that I outlined earlier, the Autel EVO 2 battery has a built-in charge-cycle counter. The battery settings menu displays the total number of charge cycles the battery that is currently in the drone has had in its lifetime.

This is helpful to determine when the next “complete discharge” is due. I like to “completely” discharge my batteries once every 20 charge cycles or so.

The DJI Inspire that I own requires that the battery is discharged below 10% every 20 charge cycles. I like this maintenance routine and I try to do it with every drone in my fleet. I read somewhere that this can help keep the battery capacity updated, meaning the percentage of life left in the battery that is displayed is more accurate.

This complete discharge can damage the battery if it is discharged too much, so be sure you don’t go too far below 10% life.

How to completely discharge

To do this I will fly the drone until I get the 25% warning and I will bring it back home and have it hover a foot or two above the ground. Let it hover until the battery warning makes the drone land, or until it’s about 15%, whichever comes first.

Then land the drone and keep it turned on until the battery is about 8-10%. Re-charge the battery to 100% to have a fully “re-cycled” battery that can provide more accurate battery charge levels.

Doing a firmware update requires the battery to be plugged into the drone, the drone and controller turned on and connected, and an internet connection.

First, the Autel Explorer app will download the firmware update file and transfer it to the drone. Then the drone will install the update and update the battery as well. This can take a little while so be sure there is enough downtime to let the drone fully complete the update.

When I’m out flying the Autel EVO 2 Pro around for fun, the 40-minute flight time is almost too long to be continuously flying. There are usually other distractions when I’m out flying recreationally, so staying focused on flying for 30 – 40 minutes straight can be a challenge.

I will usually land a couple of times to take a break and review the footage I’ve gotten to break up the 30-40 minutes of flight time.

The opposite is true when I’m using the Autel EVO 2 Pro for work. 40 minutes is usually enough time to be able to complete most jobs that I perform on a regular basis. This means less time spent landing, changing the battery, and taking off again and more time spent flying and making money.

The Autel EVO 2 Pro drone is a great photo/video drone and is becoming my go-to drone for most (non-thermal) work I am doing these days. The battery is a huge reason this drone is starting to rank as one of the best “prosumer” drones available.

The battery outperforms almost all others in its class, and it has all the necessary high-tech features that the drone industry is starting to expect from aircraft batteries.

As long as you maintain and treat the drone batteries with care, they will perform well for many years to come. Think about it like this: without the battery, the drone would not be able to “live”, so be sure to take care of the drone’s “heart” to keep it alive for a long time.