Unfortunately, producing an aerial film isn’t quite as simple as launching your drone into the air and hitting the record button.

A mixture of planning, skill and hard work is required to create an entertaining and high quality piece of work.

In this article, we’re going to be reviewing the entire process and give you a step-by-step guide on how to create your very first drone film.

Below is a great example of a drone film that won the landscape category at this year’s New York City Drone Film Festival. Hopefully this gives you some inspiration and allows you to see what is possible when filming with drones.

AUSTRALIA – The Eagle Eye from Wild Pacific Media on Vimeo.

There’s no doubt that a great drone film starts with selecting the most appropriate drone, but how do you decide which one to buy?

Well, there are several factors that you need to take into consideration. It’s worth noting that the saying ‘you get what you pay for’ couldn’t be more true when purchasing a drone. However, if you shop smart you can still get great value for money.

The three most important aspects to consider are flight time, maximum range and the drones’ camera. Of course, intelligent flight modes and obstacle avoidance sensors are nice to have, but these three aspects are what I believe to be the most critical.

Having a long flight time provides you with plenty of freedom whilst your drone is in the air. You’re able to re-take shots if you’re not completely happy with them, without having to constantly worry about changing batteries. This in itself will reduce the pressure and allow you to be more at ease knowing you have a decent amount of time to get everything shot.

Similarly, your drone’s maximum range will allow you to explore the skies further and potentially scope out new shots that you may not have thought possible when planning.

And finally, the drone’s camera is where the magic really happens. It’s worth mentioning that you can buy drones with or without an attached camera, so it depends on what you would prefer to use. Some prefer to attach their own action camera such as a “Go Pro” to their drone, whilst others prefer having a built-in camera. This is down to personal preference and there is no right or wrong decision in whichever you select.

Personally, I like to use a drone with a 4K camera as it allows you to do some cool effects in post-production like the Vertigo effect, but 1080p can be more than sufficient. However a drone with a 3-axis gimbal is a must, as this will keep your camera level during flight.

Before you begin making your film, you should go through a planning process. Decide a subject for your film – be it a place or an event. If your film is about a place, it’s definitely worth trying to maintain interest by conveying some form of a story.

If you’re struggling to think of a location for your film, this handy tip I discovered by Ty Poland might help you out. You can use Google Map’s satellite mode to find new and exciting locations that you didn’t know about. It’s a really great idea and definitely something worth doing when you’re planning out a film.

If you’re still unsure, I would suggest physically going to some of these newly discovered places and do some location scouting. This should help you come up with some cool shot ideas.

It is also a good idea to come up with a shot list. All you have to do is write down a series of shots that you wish to capture; you then methodically work your way through your list whilst you’re shooting. It’s not a great idea to try and think of these whilst you’re concentrating on the actual shooting.

Even if you’re planning on running and gunning your film, having a general idea of what shots you’re going to be recording ahead of time will be a massive help.

When it comes to shooting your film you should carry out a pre-flight check. This will minimise the chances of anything going wrong mid-flight and ensures you’re fully prepared to shoot. You can see an example of a pre-flight checklist here.

If you’re new to piloting a drone, you should start with some basic movements and shots. As you begin to get more comfortable behind the controller, you can move onto more advanced techniques. Below I’ll go over some basic shots and tips for shooting your first drone film.

Sometimes when you fly your drone forwards, the propellers can come into shot or if it is a sunny day they can also cause prop shadows to appear. Both of these issues can ruin your shot. Therefore, a great shot to start off with is simply flying your drone backwards!

By flying backwards, you eliminate the chances of this happening and it also gives you the opportunity to do what is called a ‘reveal’. You can have your drone fly backwards over an object, which will slowly come into the shot – I.e. the reveal.

You can take this further by adding in another axis of movement. For example, tilting the camera whilst you’re moving backwards. By implementing two different movements, the shot becomes a lot more cinematic looking and feels like a higher budget piece. Simple!

Another simple shot is the birds’ eye view shot. This is incredibly easy to pull off and delivers a powerful effect. Simply tilt your camera so that it is facing the ground and move your drone slowly in a direction. This shot works great if you’re filming something like a river or perhaps a car driving along the road. You can also slowly adjust the altitude of the drone whilst doing this for added effect.

The over-take shot is another great example of an easy to perform manoeuvre that looks incredibly cinematic. All you have to do is fly your drone either forwards or backwards over the subject to overtake it.

When filming with your drone, you should always remember that slow and smooth controls are incredibly important. If you’re too sharp on the joysticks, the drone will move too fast and the footage will look jumpy. It will take some time to get completely used to your drone’s sensitivity to commands, so just remember to take each control slow and steady.

Ok, so now you’ve got some incredible aerial footage, now what? It’s time to put it together using editing software. My favoured editing suite is Adobe Premier Pro, but this really is down to personal preference. Some good editing software’s are:

Unfortunately these do cost you money but if you want to put together a high quality film, good editing software is a must. 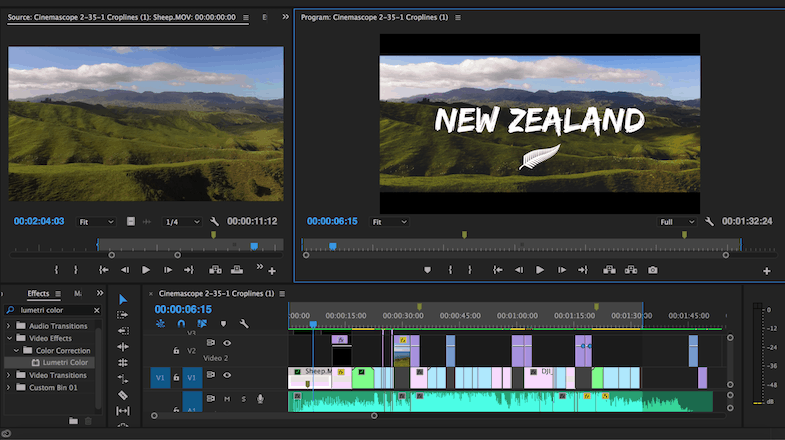 In order to get your film looking as professional as possible, colour correction is going to be extremely important. This is a step that a lot of people seem to omit, and they’re really missing out on a great tool.

You don’t have to do too much if you don’t want to, but it is usually a good idea to make a few adjustments. Below you can see the difference between a shot before and after colour correction.

Each editing software does their colour correction slightly differently, so it is hard to give specific advice. If you’re new to editing, stick with adjusting the basic controls, such as lights, darks, shadows, highlights, contrast, saturation and vibrancy.

There is also an incredible amount of information available on sites such as YouTube, where you can learn some more advanced techniques on the software of your choice.

If you’re not interested in doing this yourself, you can also buy colour-grading pre-sets online. I personally have never done this as I like to learn how to do it myself, but it does save a lot of time and effort. 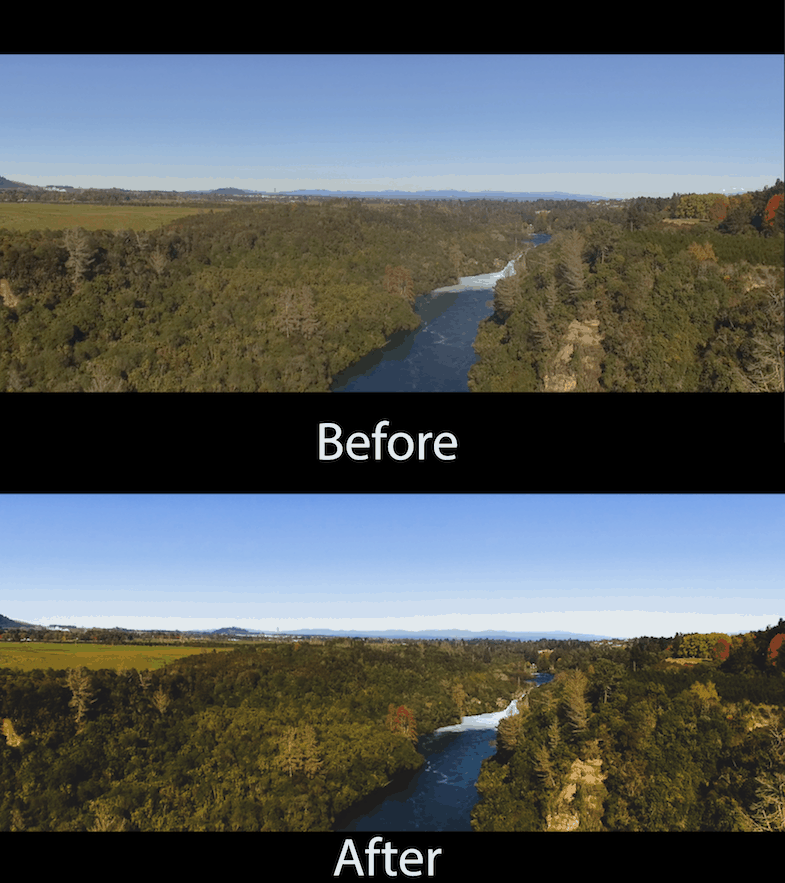 Colour Grading Before & After

Adding sound effects to your film is a very subtle way of bringing everything together and submerging the viewer into your film. These can be ambient sounds, perhaps the sound of birds tweeting or even waves crashing. Although this may seem like a minor thing, it makes a massive difference to the overall feel of the film.

I am going to confess; finding a sound track to accompany your footage can be a pretty tedious process. Luckily, YouTube Audio Library has over 150 royalty free songs that you can download for any creative purposes. You can browse by genre, instrument, mood and a few other variables.

What’s the point of going to all that effort making the film if no ones going to see it?

You can post your film on sites such as YouTube and Vimeo. YouTube is for more casual watching, whilst Vimeo is tailored towards the filmmaking industry.

As this article is coming to a close, I think it is a good idea to recap everything I’ve covered:

Thanks for taking the time to read my article on how to make your first drone film. I hope you found it helpful and if you have any questions, please feel free to comment below.