The world of FPV droning is a daunting place. It is a very involved learning process that takes a lot of dedication and commitment to become good at. Oftentimes you’ll need 30+ hours on a simulator to even be able to begin having good control over the real thing.

But if you’re like me and get bored of simulators quickly and you’d rather just jump right in, you’ll need a ready-to-fly kit that’s easy to control, can hold its position, is durable, and can handle crashes, not to mention something that is low cost.

This is where BetaFPV’s Cetus Pro kit fits right in.

The BetaFPV Cetus Pro kit is a decent little drone to start you off with, but that’s about as far as you’ll get with it.

Overall, for what it’s made for, I’d give it a seven out of ten.

I’ll go over what my needs and wants were for a drone to give a little context to my opinion, I’ll then discuss where the drone kit excels and where it loses points and finally wrap it all together to give you my final assessment. 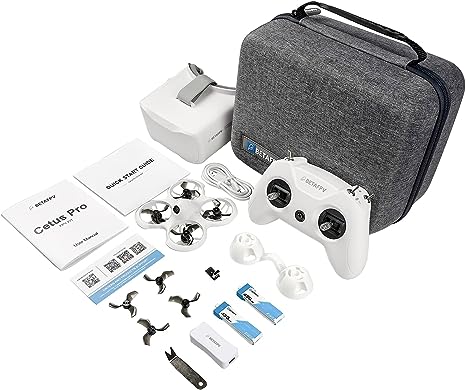 Ready-to-fly kit that’s easy to control, can hold its position, is durable, and can handle crashes, not to mention something that is low cost.

I won’t go over much of the instructions on how to fly this drone and what modes and features it has. If you’re looking for more of a tutorial on how to fly it, this is not it.

This is a review, not a manual. So, without further ado, let’s get into it.

A Little About Me and FPV

I have been flying drones professionally for about three years now, but I’m about as beginner as you can get when it comes to FPV flying.

I’ve always had an interest in learning, but was never ready to commit the time and effort, not only to learn how to fly, but to learn all the mechanics behind building these drones – because that’s a huge part of FPV drones.

You’ll crash so often, you need to know how to fix it.

I have been using the simulator Liftoff (sparingly in my case) and I often found myself getting bored or discouraged.

Now, some people might say “well hey, maybe that means FPV flying is not for you”, but I was committed to keep on trying.

My interest lies in flying the real thing, so when I was approached by BetaFPV asking me to try out the Cetus Pro kit, I thought I should give it a go.

After all, as a beginner, I was a perfect candidate to test whether or not this is actually made for beginners.

For full disclosure, yes BetaFPV sent me this drone and in exchange, I would write a review.

But I have no other skin in the game, so there’s no incentive to write just positive things. This is a full honest description of my opinion on this drone, period.

Below you will find what is included in the kit vs. what I got and my initial reaction to the quality of the products.

But there’s a reason for this, which I will go over a little later on in this article.

Below you can see all of the items listed here:

My initial reaction to opening the box and first finding the case was genuinely a big ‘wow’.

The case that the drone and accessories came in was a lot better quality than I was expecting. It came in a hard case with a gray fabric covering that stored everything so compactly.

My next reaction when I opened the case was ‘how cute’ because the drone was absolutely tiny! The goggles and controller are bigger than the drone itself and I couldn’t get over how cute it was.

Compared to the case, the actual parts inside were made with what seemed like cheap plastic, since they weighed almost nothing.

Honestly, the cheap plastic didn’t bother me because, as long as the drone was durable and everything worked and kept working, then I was happy.

All in all, in terms of an initial reaction, everything was better than expected!

These are a few observations I made about things I liked about this drone after a few weeks of testing it.

During my time testing the drone, so that I could write a comprehensive review, I had a little scare.

As mentioned in the con section above, one thing I noticed about the drone is the tiny, just big enough slot to slip the lithium battery into.

Well, turns out it doesn’t slip in that easily. After I had just charged up my battery and was ready to plug it into the drone, I guess I got a bit too aggressive whilst trying to put the battery into the little space that was made for it.

It definitely didn’t seem like I pushed that hard, I think the battery just accidentally hit something too sharp in the wrong place and boom, it exploded right in my hand, sending gray smoke everywhere.

This was all inside my apartment, so I somehow managed to separate the drone and battery and throw them both on my balcony as the battery caught fire.

The battery basically melted onto my balcony and I had to open all the doors and windows to allow the fumes to exit. I have a cat, so I took him for a nice little walk while the apartment was smoked up.

The bottom of my drone had also melted, so my plans to test out the drone that night were literally thrown out the window (and onto my balcony).

When I mentioned this mishap to BetaFPV, I was thinking it must happen often considering how tight the space is, but they told me this was the first time they’ve ever heard that happening.

Maybe I just got unlucky or had a bad battery that I didn’t notice before trying to put it in the drone, but I wanted to mention that this happened.

BetaFPV was kind enough to send me a new drone so that I could keep testing it and I haven’t had any more problems like this to date.

This is why I ended up getting the extra items when I listed what I got earlier in the article.

Below you can see pictures of the battery and drone.

In the end, I rate the BetaFPV Cetus Pro Kit a 7 out of 10 because it is an absolute blast to fly, is super durable, and great all around for what it was made for.

Where this drone lost points was on the responsiveness (that’s super important to me for learning, since you want your inputs to actually move the drone the way you intended it to) and then the design for the battery casing could be improved as I believe it’s too tight and more accidents can happen (based on my personal experience, of course).

I’d still definitely recommend it for people who are looking to get into FPV without a lot of prior experience or knowledge on the subject, or a ton of money to invest.

It’s a great test to see if you like this hobby and are willing to invest more time, money, and effort into it.

It’s a good transition from the simulator to the real thing with the N mode feature being able to hold its position, so you don’t crash every two seconds.

Although I’ve been flying this drone for many weeks now, I still consider myself a beginner and have a lot more learning I can do on the Cetus Pro.

I’d love to see and share where this drone takes me because so far, it’s getting me excited about being able to fly other FPV drones that I can slap a camera onto and be able to record footage.

I think I would definitely look to BetaFPV if I wanted to upgrade to a more advanced ready-to-fly kit, or perhaps a cinewhoop.