The DJI Air 2S is a drone pilot’s dream: it’s economical, quick, and light, with a 1-inch sensor that produces spectacular low-light images. Is there anything this drone cannot handle?

Weather conditions are difficult for these little aircraft, and the DJI Air 2S is no exception. However, how far can we push it in challenging circumstances such as wet and hot climates?

Even though we recommend that you always operate your drone in safe conditions, the DJI Air 2S can withstand adverse weather pretty nicely. I am talking rain, snowfall, and extreme winds.

Furthermore, thanks to an innovative water suit accessory, you can even fly it in heavy rain.

So what is keeping you from flying your Air 2S? Let us get started!

Before flying your drone in any weather, you should first familiarize yourself with the manufacturer’s suggested operating temperature limits.

We will not go into great depth here because you can learn more about this topic in this post.

Can I fly the DJI Air 2S in the snow?

In case you were wondering, yes, you can fly your DJI Air 2S in the snow. However, neither DJI nor we would advise it.

The fact that the intelligent flight battery would last substantially less time in low-temperature situations is the fundamental reason for this circumstance potentially causing an accident.

Aside from that, you could face unexpected power outages, which could cause the drone to make an emergency landing.

If you intend to fly your DJI Air 2S in the snow, keep the following in mind: 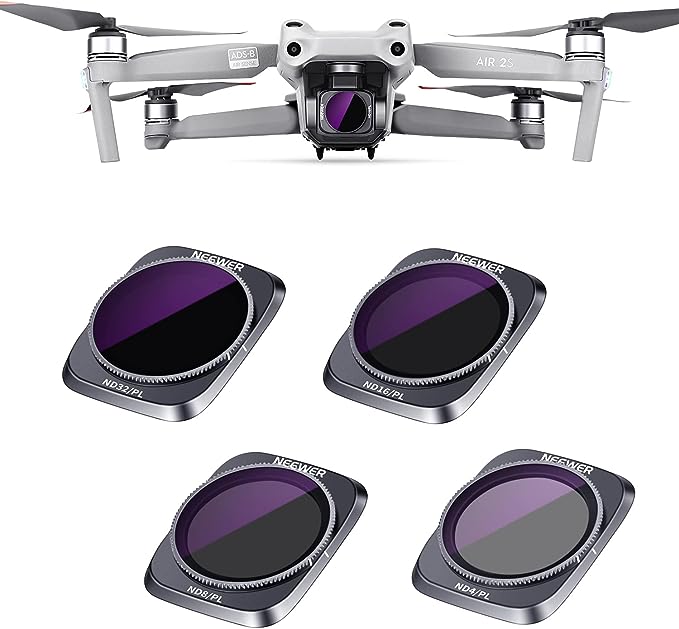 In conclusion, the DJI Air 2S can withstand snow, but the well-known YouTube channel 51 Drones would not recommend it.

Have a look at the video below.

DJI Air 2S in the rain

Flying the Air 2S in the rain is possible but not advised, as in any other weather condition and temperature outside of DJI’s suggested range.

One of the biggest problems with flying your drone in the rain is that water may enter areas of the drone that are sealed for a reason, like the battery or IMU connectors.

If you need to operate in this adverse weather condition, phantomrain.org has wetsuits available for several DJI drones.

This battery cover was created to produce an airtight seal and a vacuum, and the manufacturer employed an adhesive to do this. When you plug the battery into the drone, the wetsuit creates a perimeter over the aircraft, producing an airtight vacuum.

As you can see, to use the wetsuit you will need to be very careful, but for those who need to fly in the rain, like the UAS pilots who work in emergency services, it is an amazing product!

You can see the wetsuit in action in the video below.

Water resistance is a desirable feature in today’s electronics. For those of us who work with drones, there are times when we need to be on the edge of a dry and wet day.

It once started to rain when I was recording football games for a company where I used to work. We were permitted to film until the rain became too heavy, but the problem is that it is difficult to pay attention to the rain when you are focused on what the drone’s camera is capturing!

To cut a long tale short, after only a few minutes in the rain, both my drone and controller were completely soaked.

Fortunately, the safety of the operation was never jeopardized and both the drone and the controller were unharmed. But these two critical components of my UAS were causing great concern.

The operation would have been considerably safer if my phone had an IP rating, which indicates some water and dust protection.

This is why similar to the smartphone business, I believe that every commercial drone should begin to have some sort of IP Rating (some already do).

You can see what the different IP Ratings are in the tables below:

The brand new DJI Matrice M30 is today’s most comprehensive drone with an excellent IP55 certification.

It features a level 5 dust protection (“dust protective” in the table) and a level 5 water protection, according to the IP classification (effective against water jets).

This makes it the ideal drone for conducting inspections in places where temperatures are extremely high or low, such as deserts and mountains.

The DJI Air 2S has proven to be capable of dealing with snowfall and rain, which is noteworthy. This might lead us to believe that DJI’s most reasonably priced drone can handle any weather obstacle.

What about the wind?

The DJI Air 2S puts up a good fight against the wind, as the YouTube channel ‘DroningON’ has demonstrated.

The following are the most important points:

Here is the video in case you want to check it out.

So, as we have seen, the DJI Air 2S fought that 17 mph (27 km/h) wind like a champ, but what about extreme winds? DC Rainmaker, one of the most notorious YouTubers for this kind of test has shown us.

DC Rainmaker used his anemometer to show that the wind on the ground that day was 31 mph (50 km/h), well exceeding the drone’s specs.

These are the key aspects:

Here is the video:

The DJI Air 2S is packed with fan-favorite features like MasterShots, QuickShots, and Hyperlapse. But it is also a beast when it comes to weather resistance, something that some may not know.

Even though you should only fly in heavy winds, rain, or snow if you have no other choice, the Air 2S performs admirably in all of these conditions.

Have you found this article interesting? If you are as obsessed with drones as we are, keep visiting Droneblog for more information.